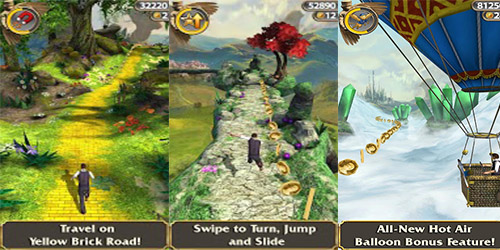 Temple Run: Oz is not really a brand new version of the game but it is a combined version of the popular game Temple Run 2 and an upcoming American fantasy film called Oz the Great and Powerful.Whatever the theme maybe the excitement is the same with all the game play still being the same.

Coming to the features the Temple Run: Oz packs few surprises for the users like new character names Oz,the Hot Air Balloon is a special attraction and a colorful scenario unlike the previous versions but thrill comes at a price and this thrill is priced at $0.99 which is quite affordable for a few hours of entertainment.